Valyndra is a lieutenant in the Lair of the Wyrm expansion.

The people of Rhynn certainly need no reminder of this elder dragon. Valyndra's lust for gold, fire, and general havoc is legendary, and she has made a habit of bringing ruin to any settlement or structure that is erected too close to her domain -- which seems to move around every century or so.

Some say that Valyndra was responsible for the first hybrid, earning her the title Wyrm Queen. Whether or not she had anything to do with the mysterious origins of the hybrids, she does display a motherly fondness for the wretched creatures, giving them places of honor in her hidden court. It is through these ruthless minions that Valyndra is able to constantly keep her coffers overflowing, for reasons unknown to the mortal mind.

Valyndra's lair is a place of legend, where all the treasures of Rhynn seem to end up. Many adventurers have dedicated their lives to finding and raiding the Wyrm Queen's chambers. Alas, the only ones that returned refuse to say much on the matter. 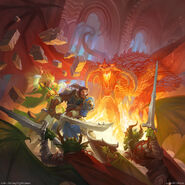 Add a photo to this gallery
Retrieved from "https://descent2e.fandom.com/wiki/Valyndra?oldid=16238"
Community content is available under CC-BY-SA unless otherwise noted.